During the exhibition Vivid Projects and partners will host some fascinating discussions on the slide-tape text on Thursday evenings.

The Some Girls poster project with young women in the West Midlands was initiated in 1978, when the National Association of Youth Clubs ran an action research project into the risks of being a young woman, funded by the Department for Education and Science (DfES).

Three early feminist youth workers used an Action Research method – just ‘hanging out’ with young women, talking, making diaries, taking photographs and recording what young women’s lives were like, from their point of view. Project worker Carola Adams, with Graham Peet and Jonnie Turpie wanted to share the learning widely, using a touring slide-tape presentation and making posters for youth clubs with the Madeley Young Women’s Writing and Design Group. But the DfES weren’t happy. They said that they thought the workers were putting words into their mouths: “girls wouldn’t talk like that……”.

The event will also include a screening of the film Giro-Is this the modern world? (1984) produced by the Birmingham Film & Video Workshop with Dead Honest Soul Searchers.

Giro explores the social and economic prospects facing young people in the context of mid-80s Britain.

** this event has been postponed due to unforeseen circumstances.
Apologies for any inconvenience caused.

Join artist Matthew J. Watkins in conversation with Yasmeen Baig-Clifford, Director of Vivid Projects on Thursday 07 November, 6pm where they will discuss Watkins’ use of slide-tape in his work.

Matthew J. Watkins worked as designer and creative director for Jamie Hewlett from the inception of his multi-platinum selling Gorillaz project which included Monkey: Journey To The West, before co-founding the influential Beat13 Gallery with Lucy McLauchlan.

Most recently, Watkins created the acclaimed visuals for Live_Transmission: Joy Division Reworked tour with Heritage Orchestra and Scanner, and collaborated with Bobbie Gardner and Kokumo as part of Vivid Projects’ 33 Revolutions programme.

Artist Cathy Wade shares the outcomes of her one week public residency for SLIDE/TAPE.

She will be joined by Karen Newman, Research Fellow (Digital Media) at Coventry University’s Centre for Disruptive Media and previously Curator at Open Eye Gallery and FACT, Liverpool.

Kodak stopped manufacturing 35mm slide projectors in 2004. In this talk, the inherent narrative of the slide projection will be unpicked. 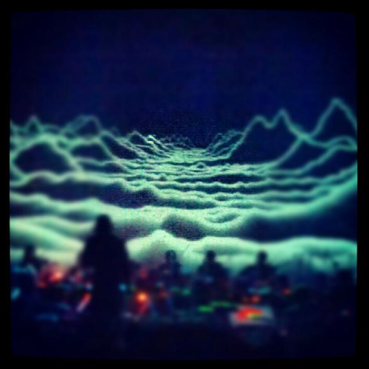