Academia meets art; join academics and artists for an afternoon of discussion and film exploring the relationship between creative practice and death. The salon features reflections on the work of artists including Derek Jarman, Ian Breakwell and George Saxon, together with academic perspectives from Universities of Birmingham and Bath.

“I place a delphinium, to be or not to be, David. Howard. Graham. Terry. Paul. Blue, upon your grave.”

Memorialization of the dead and dying takes on many forms. Sometimes a single colour comes to represent what dying can mean in the modern world, especially as ‘images of death’ suffocate the living with visual excess. What if a person’s entire death could be distilled into one, singular important hue? Derek Jarman created his most visually stunning film about death, dying, and the politics of AIDS by focusing on solely on Blue.

Dr. John Troyer is the Director of the Centre for Death and Society at the University of Bath. His interdisciplinary research focuses on contemporary memorialization practices, concepts of spatial historiography, and the dead body’s relationship with technology. Dr. Troyer is also a theatre director and installation artist with extensive experience in site-specific performance across the United States and Europe. He is a co-founder of the Death Reference Desk website (http://www.deathreferencedesk.org), the Future Cemetery Project (http://www.futurecemetery.com) and a frequent commentator for the BBC. His forthcoming book, Technologies of the Human Corpse (published by the University of North Carolina Press), will appear in 2016.

George Saxon reflects on the installation ‘A Record of Undying’, a collaboration with his late partner John Briscoe, first shown at Vivid Projects in October/November 2014. Following Briscoe’s diagnosis with terminal cancer in February 2013, Saxon navigates and unpicks the layers embodied in the recordings of the dying and death of his partner: the marking of time, the intimate space of dying and how we gaze upon the death of the other. As part of this talk there will be an extract of Ian Breakwell’s  BC/AD (Before Cancer/After Diagnosis (2005-2008) and a special screening  Saxon’s final piece ‘Love and Death’, from the exhibition A Record of Undying’‘.

George Saxon is currently course director in MA Contemporary Arts Practice at Coventry University. Saxon’s artistic practice is in part rooted in expanded cinema and performance of the 60s and and 70s, with works ranging from early experimental performance interactions with film and video, to the multi screen projections utilising both existing and prefabricated architecture as one of the founder members of the artists group Housewatch.  His solo and collaborative work has been exhibited nationally and internationally. Pivotal in Saxon’s work is a phenomenological enquiry into the ‘dynamics of the moment’ and the role of the ‘performative’ and ‘material’ vehicle of the body in relationship to trauma, conflict and liberation.

Toni Mayner / Speaking for the Dead:

‘Small Histories’ is an interactive installation inspired by the archives of the Foundling Hospital, a children’s home established for the “education and maintenance of exposed and deserted young children” in London. The purpose of the research was to convey the reality of the children’s lives, rather than sentimentalising it, and was undertaken without preconceived ideas of outcome. Reflecting on this project, Toni Mayner, Lecturer in Jewellery at Birmingham City University, will discuss the creative questions and processes that led to this work and examine the visual language within the work that represents past lives and connects with the contemporary viewer. The installation will be exhibited as part of the talk.

Toni Mayner lives and works in Birmingham as a part-time lecturer at the School of Jewellery and an independent Jewellery Artist exhibiting in the UK and abroad. Initially training as a jeweller, during her Master’s studies she developed large-scale work which led to her spending a year in the Netherlands working with Dutch silversmiths. Her work has been supported the Arts and Humanities Research Council, Arts Council England and Birmingham Assay Office.

Stick around after the salon and join Art Macabre, London’s purveyors of ‘death drawing’, as they inject a lethal dose of theatricality, curiosity and playfulness into the art of drawing from life (6.30 – 8.30pm). Drawing upon concepts, questions and ideas shared earlier in the day, Art Macabre invite you to explore deathly themes through a hands-on, creative event. RIP life drawing! Read more.

This event is presented as part of This Mortal Coil, an exhibition and events season at Vivid Projects exploring representations of death and the macabre. 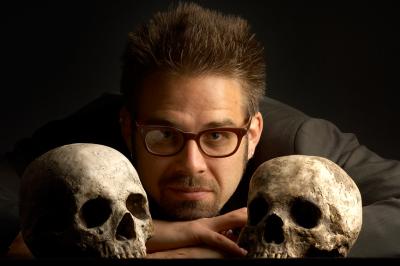