“I looked keenly around – sound-proofed walls, dollies, machinery, lighting equipment; the paraphernalia of film. Every part in the scheme reinforced the other parts. Every part conspired to keep secret its true nature – referring not to itself but to another – all parts in the machinery serving the whole – the whole serving the film. Continuous take. The body functions as a machine against the wall. Both image and sound appear out of sync throughout the intense repetition of action – the mechanical performance of the body on film are hyphenated by periodic lapses as the body tires in submission”. GS.
“Saxon’s powerful, no laughs durational film in which a thudding sound plays with the viewers perceptions. George Saxon, sometime performer, is filmed expressionless in the act of banging his head against a padded wall”
Anna Thew, 1990, Fallacies of Heroism & War.

Visit our video library and choose from a selection of works documenting post ’68 performance and live art practice.

Live 16mm performance during which performers and audience are immersed in an artillery battery of light and sound.

Approximate running time 60 minutes. Content may be subject to change.

This programme traces a chronology of gesture, dance and performance to camera spanning from 1946 to 2010. From the ‘dreambody’ of Deren’s Ritual in Transfigured Time to the physical endurance of Saxon’s Grave Dancing, ritualised actions amplify through repetition and duplication. Dance emerges as an act of survival and of transmission. As the mobile camera optimises dynamic relational engagement, the still camera fixates over this shimmering confluence that is the human form on film. Films originating on Super 8, 16mm black & white and digital, shift from the improvised, the choreographed, the staged and the incidental. TS

Ritual In Transfigured Time silently follows Rita Christiani’s perspective as she enters an apartment to find Maya Deren immersed in the ritual of unwinding wool from a loom. The notion of external invading the internal is enhanced by a strange wind that surrounds and entrances her as she becomes transported. The looming ritual is linked with the ritual of the social greeting, and continuity is established by an emphasis on gesture and/or dance throughout.

I was interested in the vocabulary of ‘white’ through the duration of aleatory activity in time and space. This is the first film. The white page, the white surface, invites a human activity, an intervention. The random details of textures of surfaces that were later exposed through making brass rubbings, the traces left by human touch and contact, the dust, the marks, footprints, fingerprints – a mirrored forensic to be used later as evidence and signs that ‘I was here’. Two clockwork 16mm cameras, positioned at slightly different angles; delineating two areas of floor space, overlapping to produce a central Rorschach effect – the body of the performer rolls into shot – slow writhing on the floor. – George Saxon

Falling Under is a collaborative dance piece between Baldwin and choreographer Suzanne Watson. Using the music of John Surman, the piece is a lyrical improvisation by four dancers perfectly translated into video by a poetic use of super 8 and natural lighting.

This French choreography duo have perfectly translated their stage performance of The Bedroom into a cinematic piece, which reveals a sensitive understanding of film’s aesthetic and formal qualities. In beautiful, slow motion, black and white, it creates a haunting atmosphere of passion and violence. Multiples of women in a room are pinned to a wall, making sharp and relentless movements, almost desperate and breathless. As rain transforms the room, the bodies descend to the ground, exhausted and abandoned in mud.’ – Film and Video Umbrella

The concerns in the work stem from my long bouts of illness in childhood and time spent bed-ridden. The constraints of the bed I likened to a grave, as the severe nature of my respiratory condition would entail ‘complete rest’. At every opportunity I would test myself with extreme physical activity, dancing to music whilst no one was watching, until finally I was exhausted again and the condition would seize my body. These dancing marathons pervaded throughout my childhood and later life. They were relentless physical performances, a private kinetic activity that became a strategy that I employed in defiance of the effects of illness. The final realisation of this work is a triptych of three dances recorded consecutively, appearing simultaneously to be in competition with each other. The ‘dance floor’ choreography attempts the same movements throughout. – George Saxon

Located in darkness, a place of no boundaries, Delilah is a ‘meditation on violence’, love and survival. Gendered gestures of empowerment, fight and flight are sharply framed in chiaroscuro light. Three women stage a percussive exchange, moving through tension and release, power and abandon. ‘The outside is within us. You moved like a warrior but I could not hold you.’ – T.S.

This film programme was originally conceived as one of four programmes for Film and the Other Arts: Intermediality, Medium Specificity, Creativity, an interdisciplinary research network funded by the AHRC (2015-2017).

Curated by Tanya Syed and Kim Knowles with thanks to LUX Distribution. 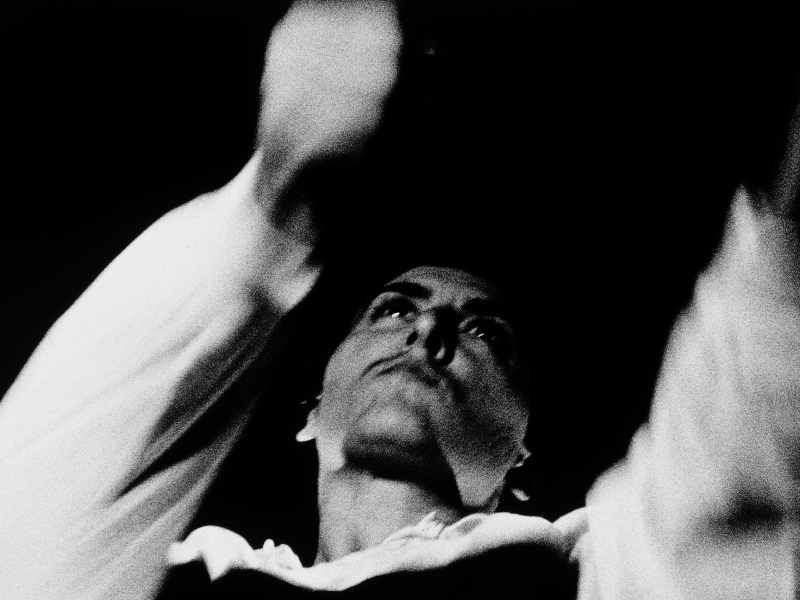