Vivid Projects is pleased to present VAGUE BUT EXCITING, an exhibition of ten artists and collectives responding to the 30th anniversary of a revolutionary concept: the World Wide Web.

In 1989, British scientist Tim Berners-Lee conceptualised the World Wide Web (WWW) whilst working at CERN. His paper ’Information Management: A Proposal’, noted as ‘vague but exciting’ by his manager, initially sought to create a distributed information system for scientists. The proposal to use the internet to link one document directly to another expanded to become a universal and free ‘information space’ to share, communicate and collaborate: the World Wide Web. Berners-Lee’s invention came during a revolutionary wave of successful civil resistance across Europe. Thirty years on, the web’s inventor has called for the fight to create a better web.

Ambie Drew is a filmmaker whose practice explores fabricated femininity, gender and identity. She does this through the construction of her digital alter ego, Ambie –  a product of amplified, kitsch and stereotypical femininity, encountered through an objectifying female gaze. In this new single channel video work, Drew utilises her internet conceived alter ego to examine a fragmented existence in the synthetic digital realm.

Proxy Pavilions aims to bring coherence to the experience of viewing digital art works made for web browsers and networked environments. It presents works on devices acting as physical and digital servers or ‘Pavilions’ (Exposed, Unauthorised Copy, Social, Privacy Policy), each containing digital artwork dealing with issues pertinent to the online experience. When a visitor connects to one of these devices they will be disconnected from the wider internet, ensuring only a singular connection to the work is made. By forcing this one-to-one connection to each ‘Pavillion’ or server, Roberts draws attention to the physicality of the internet by showing that information that is delivered to our devices globally is possible due to a global network of physically connected servers which are often hidden from consumers and the general public.

Compiler is a platform for the production and presentation of new media art and critical discourse and is led by Tanya Boyarkina, Oscar Cass-Darweish and Eleanor Chownsmith. Twin Pixel is a work sparked by an episode of cult favourite Twin Peaks and engages with Lynch’s point of contention regarding the smartphone viewing experience: ‘You’ll think you have experienced it, but you’ll be cheated. It’s such a sadness…’  Twin Pixel live streams content at the most reduced scale: in two pixel resolution. The work highlights the process of compression inherent in our experience of audiovisual content streamed to any digital device. You can connect to the streamed site here and download the accompanying leaflet Twin-Pixel-Leaflet.

The whirr and buzz of an acoustic coupled modem, the melody of a disk pulling from it’s memory the information requested from across the globe, the expectant delay as we waited for an image to appear, or a message to arrive from across continents. As an artist with a background in electrical technology, Checkley draws from thirty years experience of technological leaps and the corresponding impacts on personal communication. This new installation evokes distant memories of the sounds that we do not hear any more, lost in accelerated computer time.

Mulenga uses digital technology to explore the languages of online platforms, frequently using her avatar to examine digital identities. Mulenga’s video installation is comprised of CGI footage captured from the chat software IMVU, found footage from YouTube, and ‘real-life’ footage captured by the artist. The work harnesses ideas on identity,  representation, intuition, pleasure, playfulness and nostalgia.The shimmering sea dissolves into the neon lights of a city, and the sunset becomes a tropical blue sky which melts through the colours of the rainbow to become nightfall. Originally commissioned by BOM.

Everest Pipkin uses online archives, big data repositories, and other resources for digital information, to reclaim the corporate internet as a space that can be gentle, ecological, and personal. Their project default filename tv  harks back to the early days of YouTube; before influencers, misinformation and the relentless recommendation algorithm.  http://defaultfile.name/ is a YouTube aggregator that serves only videos that were uploaded directly from the camera, without edits to the filename. The videos are short, sometimes intimate, often mundane. Pipkin describes the secondary purpose of the work is to “absolutely wreck YouTube’s impression of your viewing habits”.

Video essay Exorbitant Privilege considers the role of the military-industrial complex in enabling the creation of the internet. Reference is made to the development of packet-switched network architectures – failure-resistant systems critical in the event of nuclear conflict – which eventually led to the civilian internet.  Chakrabarti’s work also explores the freedoms and limits placed around open-source. This can be seen in the work’s historical references (computing advances made during the Cold War were in the public domain and intentionally kept out of copyright and patent protections) and it’s construction: part of Exorbitant Privilege is constructed from footage published by the U.S. government under Creative Commons licensing. Language and coding is alluded to throughout, with reference to the screens of the mainframe computer age and coded meanings, accents, mis and non-understanding. Read more about the work here

Personae is a new digital performance work which uses facial recognition and tracking tools to create sound. The viewer interacts with the work by using a USB webcam to detect faces and face-like images painted on the artist’s body and clothing, which in turn trigger music. Personae tests the limitations of facial recognition technology and investigates how non-human entities might masquerade as human in the digital age. By ‘tricking’ the technology with simulated ‘faces’, the artist’s own identity becomes unclear, the technology no longer able to separate a real face from a drawing.

*Rosa Francesca Personae premiere performance is at 6-8pm, Friday 7 June. Documentation will be included in the continuing exhibition.

Sandra Araújo uses the explorative processes and visual culture of video games in her animations, reiterating the lo-fi quality and glitches of early computer games.  Her playful works draw from mashed-up iconic video game characters and nonsensical scenarios soundtracked with 8-bit music. U$AAR is a tongue in cheek commentary on the ways in which social media analytics can shape socio-political events. Her work has been screened in independent film and new media festivals across Europe, Canada and the USA.

Swoomptheeng (pronounced ‘swamp thing’) are a brightly masked, 8 person, Birmingham-based audio-visual collective who create music, video and gadgets to energise and engage audiences through the elements of  Zombie Bass, Rave Craft & Ritualised Punk Technology. They describe the internet as their bible – “we follow online algorithms and suggested content on a daily basis and follow it’s advice”. Swoomptheeng are celebrating this relationship by creating a birthday card for the internet. When opened by exhibition visitors, the card plays the a sound based on a scrambled modem loading music and a net themed birthday tune suitable for the occasion, using the unique sonic qualities of a musical card’s audio system.

Join us within the current VAGUE BUT EXCITING exhibition for discussions with exhibiting artists which critically engage and further contextualize their work. 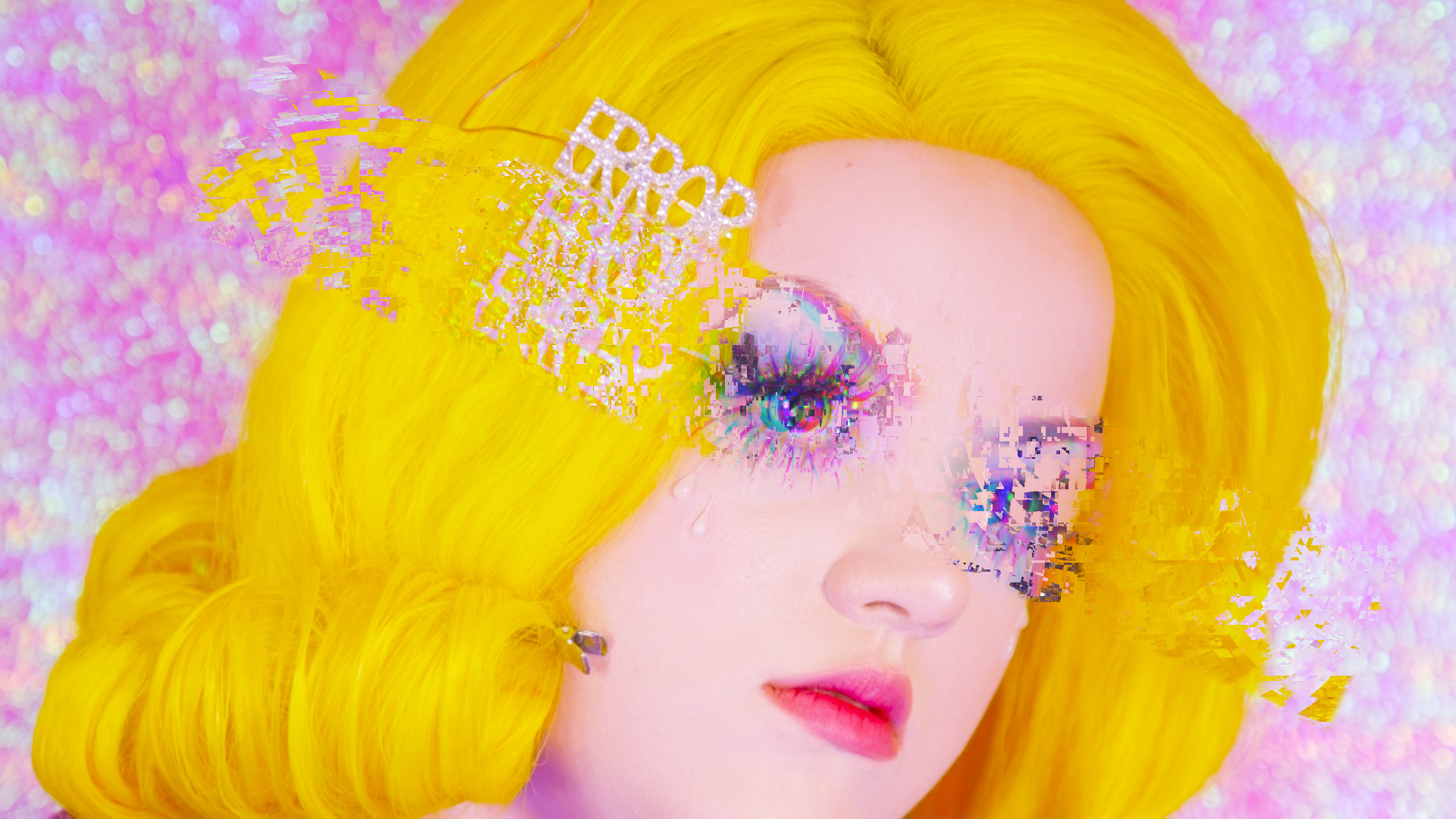 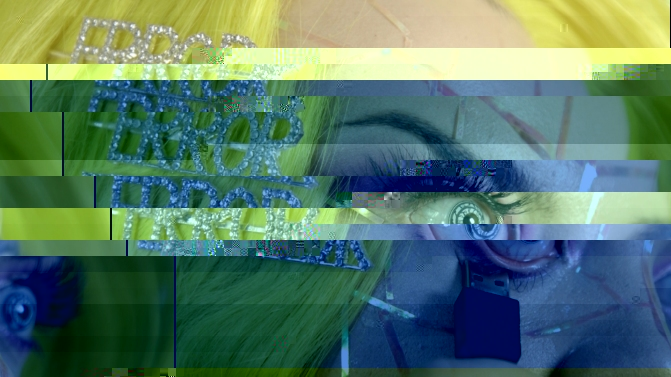